This appeared a year ago, in PN Review 245 Vol. 45 No. 3, January – February 2019. I’m posting it here now, because, obvs. I don’t know how the future will rearrange itself, but I quite liked the old paradigms. 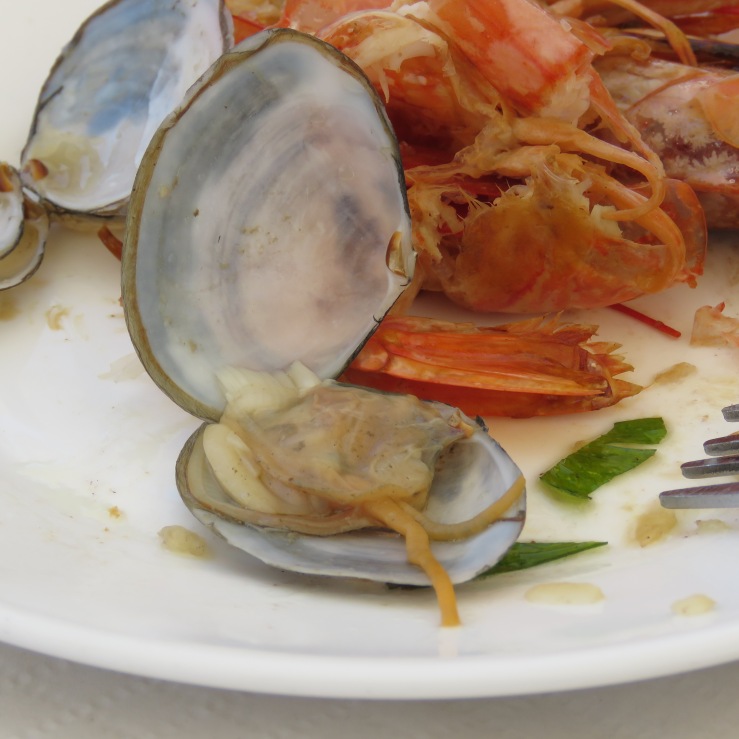 Half of the restaurant sticks out over the sea: a suspended dining-room with aluminium tables and paper tablecloths and driftwood floorboards flecked and grating with sand. The other diners sit outside on the beach itself, the legs of their chairs in the bright sullen water. Clumps of seaweed and mixed detritus shredding and shifting in the semi-dormant waves. You lean out and look into the weeds and catch the truth of that poem you quite like: Jorie Graham, the one where ‘the minnows, thousands, swirl / themselves, each a minuscule muscle’.

It is dirty, a haphazard careless dirtiness that is not unpleasant, but is simply the result of living in a world of sand and salt, where freshness is a myth and humidity levels hang around eighty percent twelve months of the year. Your clothes feel damp even before you put them on; paperbacks decide to imitate the surrounding Atlantic and twist themselves into waves that after a few days slump saturated back into flatness.

You are here to eat. You eat aliens: deep-fried sea anemones that are sacs of salted jelly; clams that have swung open like Bibles. You tear off and suck the heads of gambas rojas, enjoying the salty brain. Your son throws breadsticks to the fish. You eat cazón, dogfish. The serving plates are passed round until they are empty. You eat chips and fried green peppers, and drink beer from frozen glasses.

Today you don’t really talk to your wife’s family, Óscar and his girlfriend, but when you do, you talk about nothing. This is not the place for political discussion – you are here to eat – but today in particular nothing seems to catch. Conversations start up and fail, and you cover this failure with chips and clams. It’s odd, you are not uncomfortable, but there seems today to be a wall between you and the rest of the world. You feel happier looking at the sea, the little fish ‘making of themselves a / visual current’.

Housman: ‘the sea is a large department; [but] as a subject of poetry is somewhat barren’. But today you understand it, can see why children love the sea, how it works as a first introduction to the world of metaphor. All the straightforward questions and answers: the impermanence of humanity, the sandcastles being sucked away by the rising tide, this vast indifferent colourful object, the same material always rearranged in subtly different combinations. All so obvious and nonetheless true. What will the crabs leave after I drown, you think to yourself. The steel plate from your skull.

This morning, before coming out to the restaurant, you walked through the old town. Manuel lived here when he was younger, and knows how it works, but Herminia, who grew up five hundred metres away, on the avenue, claims always to get lost in its alleys. You yourself feel uncomfortable here: a world made out of backstreets, most of which you think you have never seen before, even as you walk them over again. It’s a fractal city: the closer you look at it, the more detail it reveals. Not to mention the history, the layers upon layers. The oldest continually inhabited city in Europe: you are constantly surprised by Phoenician noses and eyes, Roman faces, Celtic faces, the faces of Al-Andalus. The centre of the garum industry at the time of Augustus: fish guts fermenting and dripping through tight-plaited baskets.

Byron wrote his worst poem here, in a fog of coital longing: ‘born beneath a brighter sun / For love ordained the Spanish maid is, / And who, when fondly, fairly won, / Enchants you like the Girl of Cadiz?’ Who indeed. Slightly better are his descriptions of the place in his letters, although they still give the impression of being written by a bigoted lovesick cartoon wolf, his eyes popping and his tongue unrolling over the table: ‘Cadiz, sweet Cadiz! – it is the first spot in the creation. The beauty of its streets and mansions is only excelled by the loveliness of its inhabitants. For, with all national prejudice, I must confess the women of Cadiz are as far superior to the English women in beauty as the Spaniards are inferior to the English in every quality that dignifies the name of man.’ Or this, from a letter to his mother: ‘Long black hair, dark languishing eyes, clear olive complexions, and forms more graceful in motion than can be conceived by an Englishman used to the drowsy, listless air of his countrywomen, added to the most becoming dress, and, at the same time, the most decent in the world, render a Spanish beauty irresistible.’

Enough wooziness, enough décolletage. It’s a city built out of reclaimed rock from the sea, fossils in every wall you touch. The city fights the sea; the sea fights back: Cádiz is a shifting space. When your older brother came to visit a year or so ago, you walked him past the port to the best ice-cream parlour in town. On the way home, he suddenly stopped, owlishly confused: ‘Wasn’t there a block of flats here when we came by earlier?’ One of the regular seven-storey cruise liners had slipped away, changing the configuration of the labyrinth. But today, for an afternoon at least, you have broken out, and everything is much simpler. You were just here to eat.

When you have eaten, you all walk out of the back door of the restaurant onto a small weedy beach. Your son wants to run into the water; your brother-in-law holds him back and swings him round, both of them laughing and apparently happy. There are some dead dried crabs laid up on a pile of driftwood. ‘I am free to go. / I cannot of course come back. Not to this. Never.’ Herring gulls. Stray cats. A placard tells you that all stray cats here are captured and neutered before being allowed back into the wild. A blue European flag flies lazily above the restaurant. You are suddenly very tired, and feel very alone.